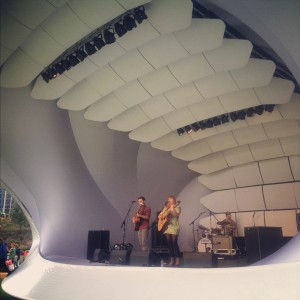 Wow, it’s been a busy Summer, the highlight of which was definitely playing at London2012 in the Olympic park as part of the Emerging Icons Showcase.

The stage looked like a giant Shark’s Mouth or some kind of spaceship. Definitely the most impressive stage I’ve ever played on! And a bit special to be playing inside the Olympic park – felt like I’d won a golden ticket to Charlie’s Chocolate Factory! London at it’s most helpful and friendly ever – All those TeamGB Gold medals really seemed to put everyone in a good mood. As usual I was torn between TeamGB, TeamOz and TeamGermany, but must admit TeamGB won me over….I’ve lived here for years now! So for a fortnight everyone’s obsessed with obscure sports and loving it, even me who generally pays no attention whatsoever to sport, very unAustralian of me…..

Also played at the Greenwich Summer Festival, timing my set between Usain Bolt’s 100m sprint trials and final, and was right next to all the Equestrian action in Greenwich Park! Was joined by the lovely MissWalsh on vocals and glockenspiel as well as regular band members, Joe Allen, Ben Thomas and Rich Hughes. Allan Cuevas kindly joined me in the Emerging Icons live ‘webstival’ shoot on a windy and rainy day in a North London park – luckily we were playing under a huge tree and looked after well by the pro audio/visual guys at Emerging Icons!

So there’s still the Paraolympics and some summer left to enjoy in London.  I’m looking forward to playing at the Climpson Arches on the Monday Bank Holiday too – always a party there and get fed extremely well too :)